Recent developments in the tidal power sector in the United Kingdom are very positive and reinforce our view that when tidal energy versus wind power is considered tidal wins. We are not alone in thinking this, as several large schemes are now gaining commercial investment and progressing toward full design stage. Onshore wind power has been under attack from many different groups and those who have been speaking out against the UK government’s reliance on wind power, have seen their wishes granted in government announcements of subsidy reductions for wind power projects in the future.

The overriding aim, of all governments must also be to ensure that they meet our renewable energy goals, and the new crop of tidal power schemes now being planned for the UK are large and in principle capable of meeting a lot of the additional renewable power needed from 2020 and beyond.

According to The Times newspaper, if the UK government wants to meet or exceed its legally binding target, the UK needs to build 7,000 or so, more wind turbines if it intend to continue to favour this form of renewable energy production. That was always going to be a high number to expect, if the politicians had fully considered the degree of “not in my back yard’ism” and anti-wind petitioning that is generated as soon as nearly every planned wind farm is announced.

Tidal power supporters explain that, unlike wind power systems, the generated energy output can be dependably forecast, except for extreme weather condition impacts.  But, on the other hand, while some generation is feasible for the majority of the tidal cycle, in real-life tide turbines produce a lower energy efficiency performance at reduced operating rates (turbine rotation rates). Given that the power readily available from a particular flow is in proportion to the cube of the water flow rate, the times of the day throughout which high efficiency power generation is achievable are quite short.

The tidal power plant option does however, offer the possibility of indirect ecological advantages in addition to providing a sustainable renewable resource, provided that there are no polluted discharges into it. After the tidal seawall is constructed, any water contamination accumulated in the freshly developed tidal lagoon would not be as fully “flushed” by the tide cycle as previously, making its water of no value for fish farming, or recreational uses.

What the tidal power adoption indicated as much as merely a couple of years back was a need for a tidal barrage, which resembles a dam. Yet on a considerably larger scale. These are likely to function much like a hydro-electric power plant. A barrage is essentially a dam that is constructed right across, spanning a tidewater (estuary/ river mouth), with passages built below it, permit water to travel through as well as power turbines to generate electrical power. Twice daily, each time the tide flows in as well as out, it would certainly rotate the installed turbines.

While tidal power as a power resource does have a capacity for sustainable power production for the future, at this time a lot more research study, as well as engineering design development needs to be done to discover the most effective inexpensive, and very power efficient method of taking advantage of the sea’s tidal powers.

Many people take the view in the UK, that there is such a restricted amount of accessible and suitable site locations in the seas around many coasts, put together with the fairly high prices of building these “dams in the sea” , that this is not yet thought about fully as a long-term resource of alternate green power.

Dynamic tidal power, or DTP, is another newer concept. It is untested so far, however encouraging modern technology is yielding real benefits for improved and more flexible tidal power generation. It is likely to entail producing a lengthy dam-like bund (dam wall) at right angles to the shore, with the alternative made available for a typical coastline in parallel with a barrier at the back, developing a huge ‘T’ shape form. This lengthy T dam would certainly disrupt a coastline-parallel tidal bore.

Dynamic tidal power does not need an extremely high all-natural tidal range, yet as an alternative an open shore where the tidal rise and fall is alongshore. Tidal conditions like these could be located in numerous areas all over the world, meaning that the academically assessed possibility of DTP is really quite high. Along the Chinese coastline for instance is an example. The overall quantity of readily available power is approximated at 80 150 GW.

The generation of tidal power is, as we have discussed earlier, very foreseeable because of the deterministic nature of tides, as well as its almost complete independence from weather conditions or environment adjustment. Power outcome differs with the tidal stage. Ebb, flooding is a risk, however this could be prevented by integrating 2 dams, positioned at a specific range from one another weighing (in the order of 150– 25060; km), each creating electrical hazards of high energy in the trucks result when the others are creating very little. That is the biggest advantage of tidal Energy Versus Wind Power.

Here are some more tidal energy systems which are being tested at the moment. Click on the image to view a larger version. 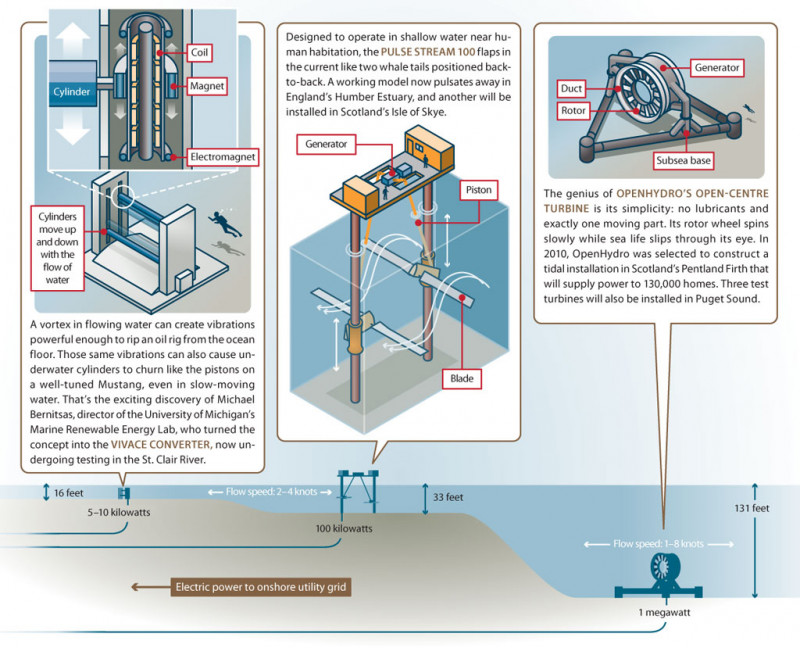